Dehradun, 13 Nov: Himalayan Institute Hospital Trust and Swami Rama Himalayan University commemorated the sacred occasion of the 27th Mahasamadhi Day of the founder, Dr. Swami Rama, here, today.
Speaker of the Uttarakhand Legislative Assembly Ritu Khanduri was the Chief Guest on the occasion. A large number of followers of Swami Rama from India and abroad, as well as invited dignitaries graced the occasion with their presence, apart from students and staff members.
On the occasion, the ‘Swami Rama Humanitarian Award’ instituted in honour of the Founder President by the Himalayan Institute Hospital Trust, Swami Ram Nagar, was conferred upon Mahabodhi International Meditation Centre, Leh. Also, 31 employees of HIHT and SRHU were awarded for their dedication to service. Many of them have been employed with the organisation for over two decades.
Speaking on the occasion Speaker Khanduri reiterated that she was proud to be standing on the ground where education, health and spirituality have combined to make the earth a better place. She also released the annual calendar for the year 2023. 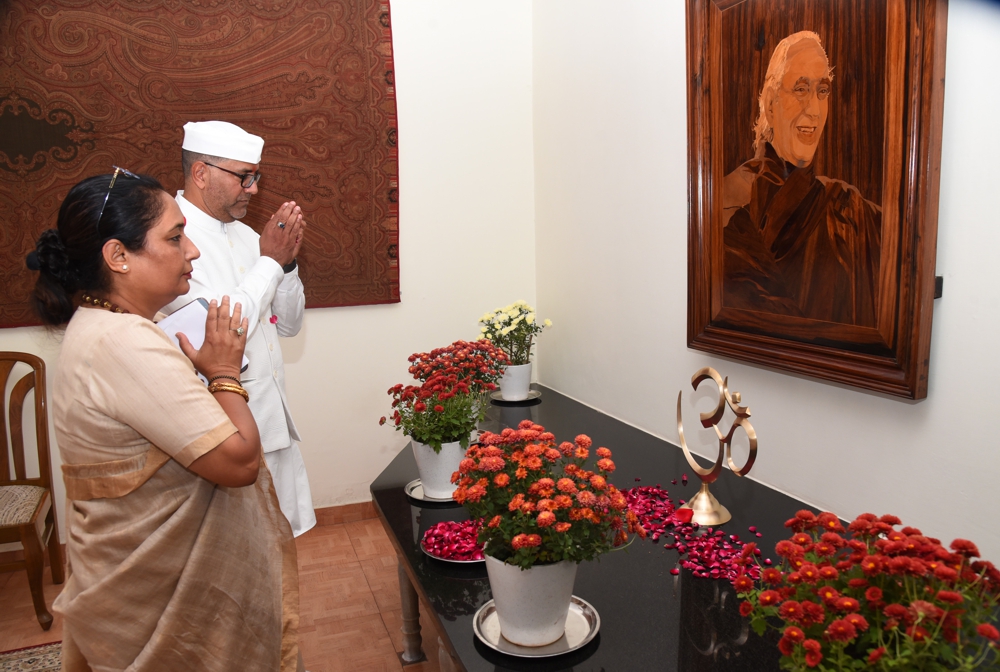 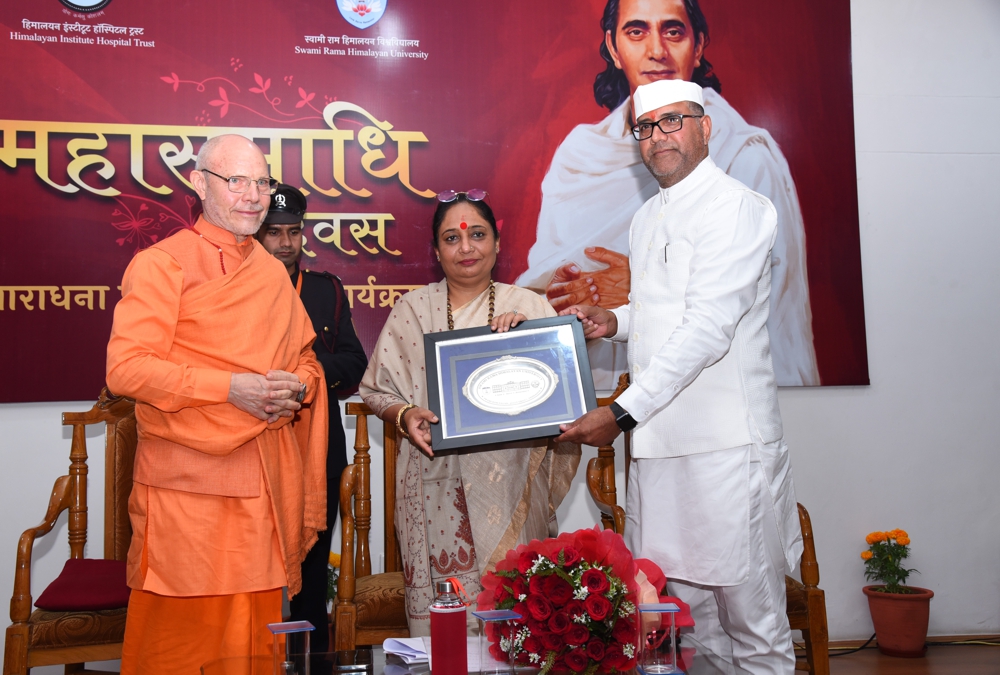 Dr. Vijay Dhasmana recalled the influence Swamiji had on his life as well as the lives of thousands. Dr. Dhasmana’s dedication to selfless service of mankind led his Guru, Swami Rama, to appoint him as the Treasurer of the Himalayan Institute Hospital Trust in 1994 and a Member of its Presidential Body in 1996. Dr. Dhasmana has been serving the vision and mission of his Guru tirelessly and whole-heartedly, taking the organisation to greater heights year after year. “We have truly believed and followed Gurudev’s teaching of ‘Love, Serve, Remember’ throughout and dedicated ourselves to the service of mankind. Gurudev’s commitment to healthcare, and promotion of medical education and research, has been an integral part of his vision for his motherland, Uttarakhand,” he reiterated. He outlined the work of the organisation over the years and its plans for the future. The programme was ably conducted by Dr Jyoti Diwedi.
Pro Vice Chancellor Dr. Vijendra Chauhan delivered the Vote of Thanks. Before that he invited all to partake in the Bhandara for Guruji’s Prasada. 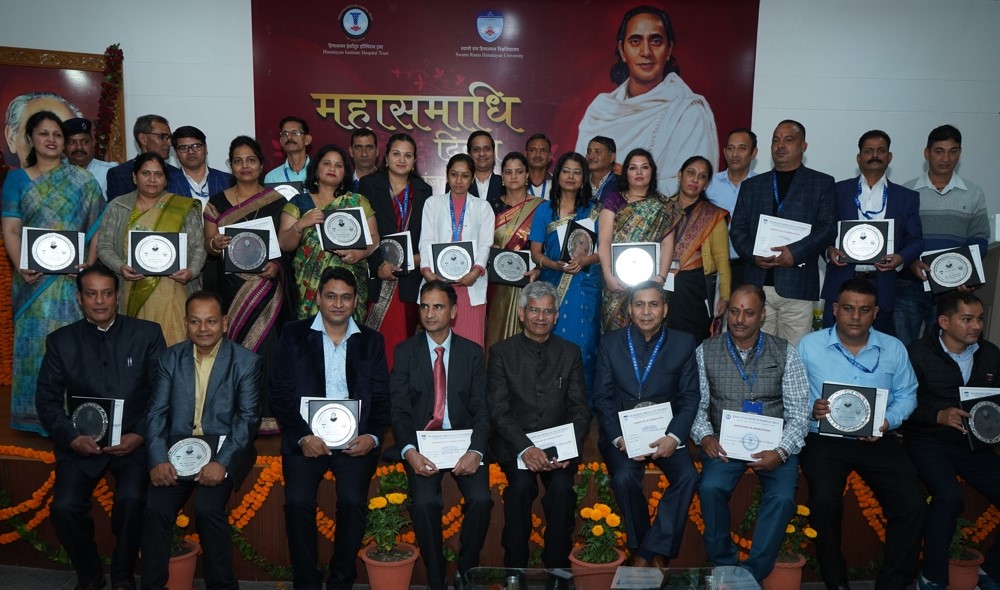 Founder Dr Swami Rama, was born in 1925 at Village Toli, Malla Badalpur, Pauri Garhwal Uttarakhand (erstwhile Uttar Pradesh) to an erudite Brahmin family. Swami Rama was raised from early childhood by a great yogi and saint of Bengal, who resided in the foothills of the Himalayas.
In his formative years, he practiced various disciplines of Yoga and Philosophy in the traditional monasteries of the Himalayas and studied closely with many spiritual adepts, including Mahatma Gandhi, Sri Aurobindo and Rabindranath Tagore. He also journeyed to Tibet to study with his grandmaster. Later, he received his higher education at Bangalore, Prayaga, Varanasi, and Oxford University, England. At the young age of 24 years he became Shankaracharya of Karvirpitham in Central India, succeeding Dr Kurtkoti to the highest spiritual position in India. During this term, he exercised tremendous impact on the spiritual customs of that time: he helped eliminate useless formalities and rituals, made it possible for all segments of society to worship in the temples, and encouraged the instruction of women in meditation.
Later, in 1952, he relinquished the dignity and prestige of this high office, to return to the Himalayas to intensify his meditative practices in the monasteries. After completing a forceful, 11-month meditation and pranayama practice in isolation in a sealed 6' x 4' cave, with only a single pinpoint of light, he emerged with the determination to serve humanity, particularly to bring the teachings of the East to the West. With the encouragement of his master, Swami Rama began his task by studying Western Philosophy and Psychology, and teaching Eastern Philosophy at many Western Universities. He worked as a medical consultant in London and assisted in para-psychological research in Moscow. He then returned to India, where he established a clinic and ashram (Sadhana Mandir Trust) in Rishikesh. In 1960, he completed his degree at the medical college in Darbhanga. Later, he went to Japan, where he established a major spiritual centre. At the behest of his master, he went to the United States in 1969 and established the Himalayan Institute of Yoga, Science and Philosophy.

"In childhood, one learns through imitation and example. You don't learn through books, mere words or through culture or philosophy but you learn by seeing what others do. When a mother and father are good examples for the child, then that child is very happy and secure and grows up without fears or selfishness. Modern society has not yet attained the height of a culture where you truly learn to give to your children. That is why it is still in a primitive state. Regrettably, these days, although human beings are growing, it is happening in a wild and selfish way.
Since your childhood you have been taught to see and examine things in the external world, but no one has ever taught you how to look within, see within and discover within. No one teaches you how to look within, to find something within, and to go to the 'Source' within. This subtle teaching is missing in your home life. This one important part of life is ignored by your educational systems at home, in the society and in the colleges and universities: know thyself, you need to understand yourself on all levels.
If children are trained systematically from the very beginning, they do not become absent-minded: being absent-minded means that you want to remember something, but at the same time, you don't. The desire is there, the fire is there, but you are not really giving fuel to the fire: you don't really evince full interest; the heart is missing!
I often find that in the schools and colleges, children are taught in the harshest and critical of ways. That is why they do not make much improvement in their lives: they become victims of the sole process of learning how to remember things. They do not learn the technique of how to forget things. They only know how to learn; they do not know how to unlearn. Because you do not know how to forget and unlearn, when you want to go to bed, to retire and relax your mind, you cannot really do this. You have not learned how to unlearn negative or disturbing things that you have learned. That creates serious problems all over the world, both in the West and the East, especially amongst younger generations. Many things are constantly going on in your mind; your mind is thinking and thinking and you cannot gain freedom from that process. "

The Himalayan Institute Hospital Trust conferred the ‘Swami Rama Humanitarian Award – 2022’ upon Mahabodhi International Meditation Centre, Leh-Ladakh.
The award consists of Rs Five Lakhs, a Gold Medal and a Citation.
Mahabodhi International Meditation Centre (MIMC) was established in 1986 by Venerable Bhikkhu Sanghasena in Saboo-Dho, Leh-Ladakh. He had joined the Indian Army at the age of 17 and developed a strong sense of personal discipline and responsibility. In 1977, he felt the inner spiritual call and decided to leave the army to become a committed disciple of the renowned Buddhist scholar and monk, Venerable Acharya Buddharakkhita Mahathera, the Abbot of the Mahabodhi Society Vihara, Bangalore. Having received full ordination, Venerable Sanghasena undertook rigorous studies of the Dhamma and practiced various methods of Buddhist meditation.
In 1986, Venerable Bhikkhu Sanghasena, returned to Ladakh and founded the MIMC in Ladakh. Since then, he has worked tirelessly and selflessly to put the Buddha's teachings of loving, kindness and compassion into action through multifarious charitable humanitarian services. The Devachan campus of MIMC is spread over 250 acres of land. 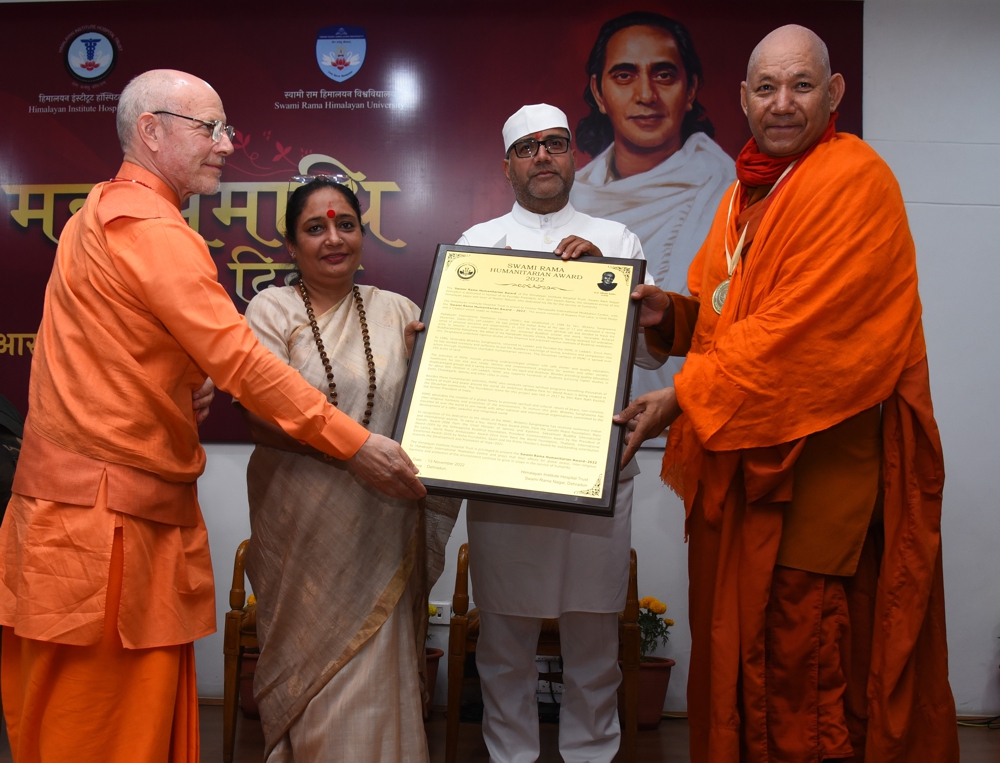 The activities of MIMC include providing underprivileged children safe shelter and quality education, healthcare for the sick and needy, literacy and empowerment programmes for women and other socially-disadvantaged groups and a caring environment for the aged and destitute.
Besides providing quality education for about 800 children in Leh-Ladakh, MIMC also supports hundreds of students pursuing higher studies in Delhi, Chandigarh, Jammu and other cities in India.
Besides these humanitarian activities, MIMC also conducts various spiritual programmes benefiting thousands of seekers of truth and peace around the world. An ambitious Buddha Park for World Peace is being created in the Devachan community. The foundation stone for this project was laid in 2017 by former President Ram Nath Kovind.
MIMC advocates the creation of a global family to promote spiritual and cultural values of peace, non-violence, inter-religious harmony and protection of the environment. To nurture this goal, Bhikku Sanghasena has travelled all over the world to join hands with other national and international organisations committed to the development of a safer, peaceful and integrated world.
In recognition of his dedication to the ideals of the MIMC, Bhikku Sanghasena has received numerous Indian and International awards. To name a few, World Peace Award-2004 from the Gandhi Peace Foundation, Rajiv Gandhi Award–2006 from the Chief Minister of Jammu and Kashmir, Sakyamuni Buddha International Award–2009 from the Ashwagosha Buddhist Foundation, President Commendation Award from the President of Sri Lanka, World Peace Ambassador Award–2014 from Save the World Foundation, Thailand, International Excellence Award–2020 by Nisha Foundation, Spain, and the Prime Minister’s Award for outstanding contribution towards the Development and Promotion of Yoga–2021.
The Himalayan Institute Hospital Trust is privileged to present the Swami Rama Humanitarian Award – 2022 to Mahabodhi International Meditation Centre and prays that their efforts for global peace, inter-religious harmony and protection of the environment continue to grow in scope in the service of humanity.